The ICC Men’s T20 World Cup 2021 is almost upon us, with the groups for the Super 12 Stage revealed. Take a closer look at the eight confirmed teams for the second stage of the tournament.

England will try to back up their 50-over success in 2019 and use the same core players in UAE.

The country’s greatest T20 World Cup moment came in 2010 when they have crowned champions in the Caribbean, and they were close to repeating that effort in 2016 before Carlos Brathwaite’s late intervention.

Eoin Morgan’s side has won their most recent T20 series against all of the other nations confirmed in Group 1. England overcame Australia 2-1 last year, and have won five matches and three series on the bounce against South Africa. They have not played the West Indies since a 3-0 win in 2019 but did of course lose twice to them in the last T20 World Cup – including famously in the final.

Top-ranked batter: Dawid Malan (1st) – The left-hander has been a rock for England in their top-order, playing the foil in an explosive batting order while still having the ability to put the foot down. With an average of 47.39 and a strike rate of 143.04, Malan shapes as a key man for Eoin Morgan’s side.

Top-ranked bowler: Adil Rashid (3rd) – Dangerous and economic, Adil Rashid had been a constant in England’s bowling attack. The leg-spinner has been leaking just 7.07 runs a year in T20Is in 2021 while striking every 21 deliveries.

Eoin Morgan (captain): “India are going to go into the World Cup as favorites – and I think it is justified. They are a really strong team, they have a lot of depth in their squad as well and have all bases covered. We’re on a different journey at the moment than we were going into the 2019 50-over World Cup.” 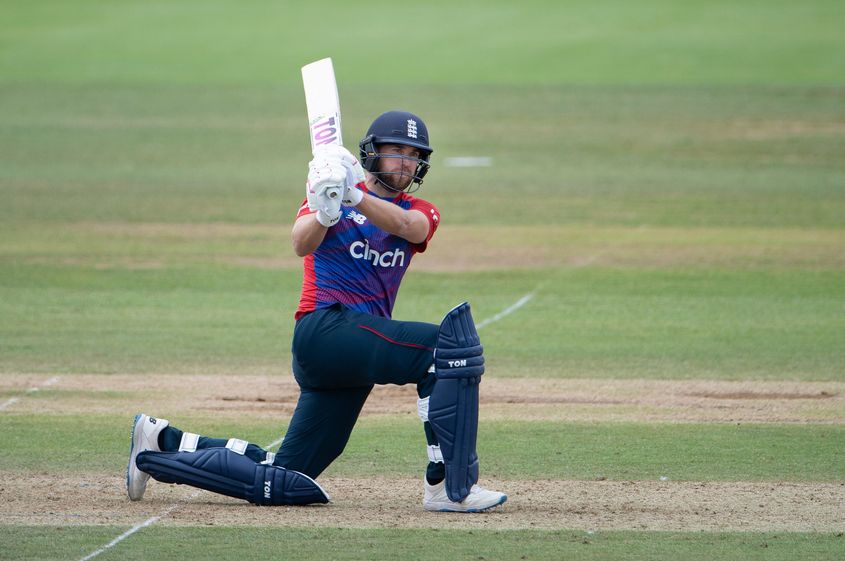 Australia has yet to win a T20 World Cup. The closest they came was a defeat to England in the 2010 Final, and they will have to perform well above their ranking (fifth) if they are to go one better in 2021.

Australia lost their most recent T20 series against England 2-1 and was also beaten by the English in their only appearance in a ICC T20 World Cup Final – back in 2010. The Aussies’ record against the West Indies is similarly poor, and they currently trail the Caribbean outfit 3-1 in a bilateral series. But they do have the wood over South Africa, having won the most recent series over the Proteas 2-1 – with both wins coming at a landslide.

Top-ranked bowler: Ashton Agar (6th) – The left-arm finger spinner has been a key figure in Australia’s attack for the past 12 months in T20I cricket, operating in tandem with Adam Zampa. As economic as they come (6.94), he boasts the fifth-best men’s T20I figures of all time, having taken 6/30 against New Zealand earlier this year.

Aaron Finch (captain): “Having played there (UAE) quite a bit over the last four or five years I think that we’ll be okay in terms of how our plan has gone, compared to if it was in India. We expect the wickets to be pretty similar: little bit of turn, and probably turning more and slowing up as the tournament goes on.” 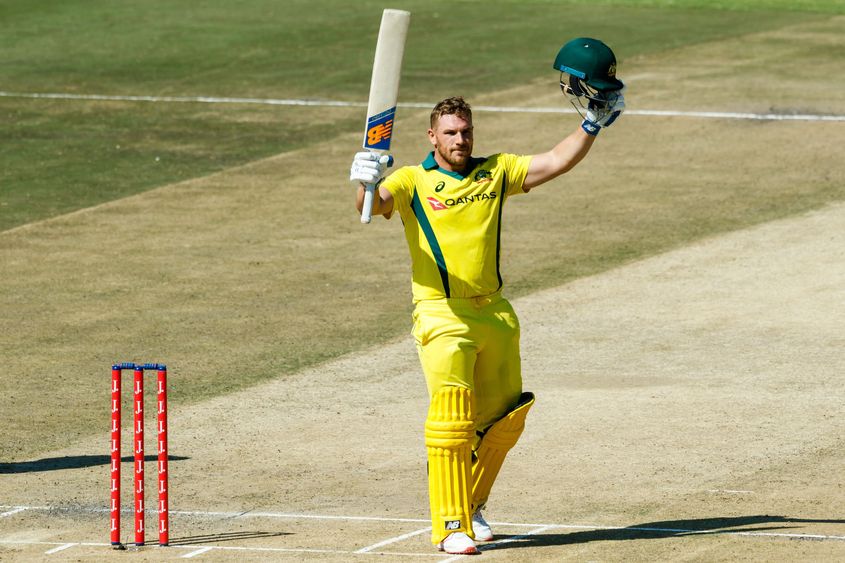 The Proteas are undergoing a period of transition in all forms of the game but their recent series win over West Indies is cause for optimism. They will be looking to carry on that form as they aim to go better than their semi-final appearances in 2009 and 2014.

South Africa lost their most recent series against both England and Australia, but have a strong record against West Indies, with nine wins from their 15 meetings. Their 3-2 series win in the Caribbean this year was an upset result against the two-time T20 World Cup champions.

Top-ranked batter: Rassie van der Dussen (7th) – A model of consistency, van der Dussen has been used in every position from one to five in South Africa’s batting order but has looked his best in the middle order.

Top-ranked bowler: Tabraiz Shamsi (1st) – The left-arm wrist-spinner has sat on top of the T20I bowling rankings since April and that’s no surprise given his economy of 6.89, average of 25.05 and strike rate of 21.70. Across his past 10 T20Is, Shamsi has only leaked more than a run-a-ball in four matches and only twice gone at worse than seven-an-over.

Temba Bavuma (captain): “If you look at South Africa, we have always been a more than competitive unit, even to the point where the guys have got to positions of No.1 [in the world]. For me, it’s about trying to define a style of play, create something that makes us accountable, and most importantly, to be able to institute that style of play in any conditions or any occasion.” 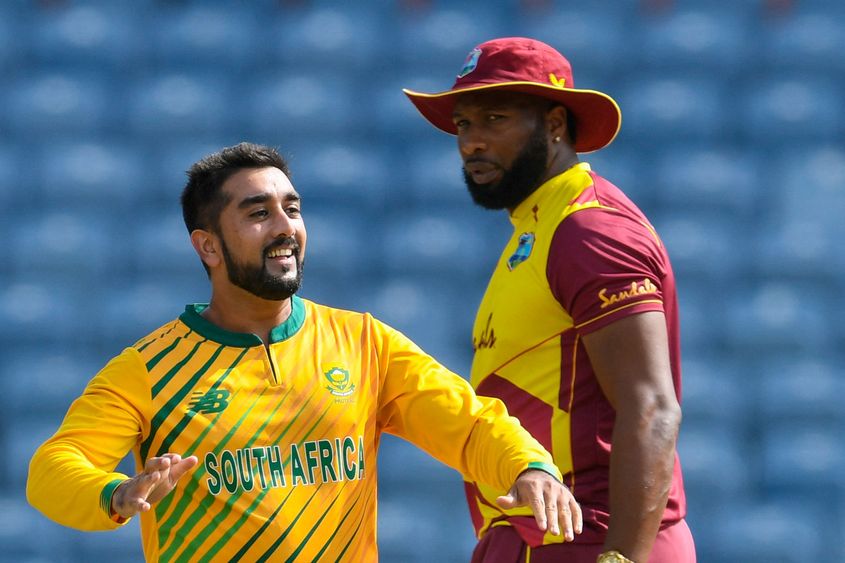 Boasting a fearsome batting line-up and a plethora of world-class all-rounders, the two-time defending champions will pose a major threat to any opposition. Champions in 2012 and 2016, the Caribbean outfit will take some beating this time around.

The West Indies slumped to a 3-2 loss against South Africa earlier this year. They haven’t played England for two years, but beat Eoin Morgan’s side twice at the last T20 World Cup, while they have a dominant record over Australia in the shortest form of the game and currently lead them 3-1 in a bilateral series.

Top-ranked batter: Evin Lewis (10th) – As powerful as they come, Lewis boasts a frightening strike rate of 157.21 at the top of the order, where he has played all 42 of his matches for West Indies. Few are as hard to stop when he gets on a roll

Top-ranked bowler: Fabian Allen (10th) – Electric in the field and powerful with the bat, it is with the ball that Allen is actually at his best. The left-arm finger-spinner shot up 16 spots on the most recent T20I bowling rankings update and is very much a man in form.

Phil Simmons (coach): “We got to think a bit more and be a little bit smarter in our cricket, smarter especially in that seven to 14 overs (period). We’ve been good in the back end but we need to work on the middle section.” 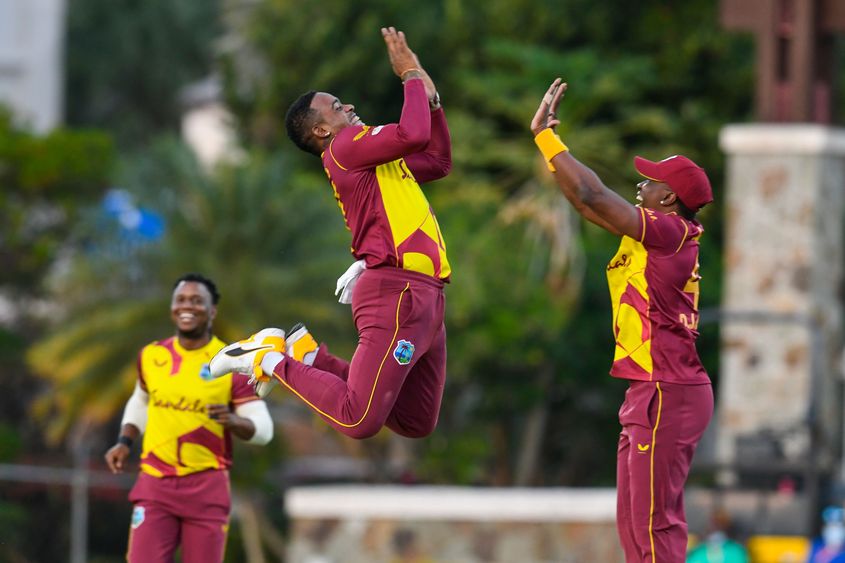 An entertainer through and through.

Currently number two in the rankings, India are well stacked in terms of depth in all departments and are chasing their first ICC trophy since winning the Champions Trophy in 2013. Their best performance to date in the T20 World Cup remains the inaugural edition of the tournament in 2007, where they were crowned champions.

India has a strong record against all three of its confirmed group opponents. They have never lost to Afghanistan and have tasted defeat just once in a T20I again Pakistan, winning the last four meetings with their neighbors. Virat Kohli’s side won 5-0 in the most recent T20 series against New Zealand, although remarkably two of their last three games against the Kiwis have ended as ties, with India winning both one-over eliminators.

Top-ranked batter: Virat Kohli (5th): The India skipper will be front and center in opposition game plans and rightly so.  Kohli is the greatest run-scorer in T20I men’s cricket history, with 3159 runs to his name at an average of 52.65 – the best of anyone who has batted at least 20 times.

Top-ranked bowler: Washington Sundar (15th): With India rotating their bowlers regularly over the past two years in T20I cricket, Sundar is a surprise name at the top of their rankings but brings plenty to the table with his right-arm off-spin. A disciplined spinner, don’t expect Sundar to give away any easy runs.

Virat Kohli (captain): “England will be the team to beat. They’re the number one side in the world and the prime focus will be on them. All other teams will be wary of the strengths they bring to the park. Every other team will agree with me.” 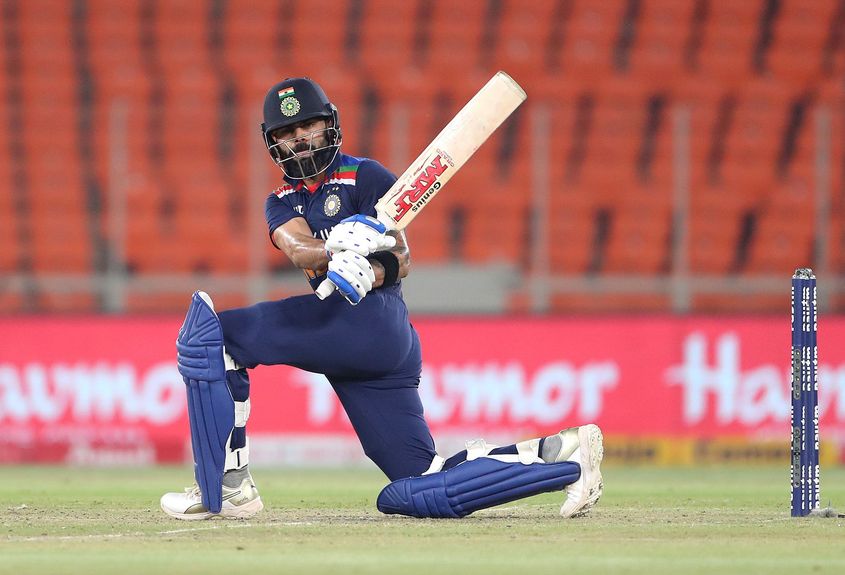 Captain Babar Azam leads a quality squad looking to adding to their 2009 World Cup crown. Azam spearheads an impressive batting line-up, while a varied and dangerous attack has all the tools required for Pakistan to mount a strong challenge.

Pakistan has not played Afghanistan in the format for eight years, winning that meeting – the only T20I match between the two nations to date. They have beaten neighbors India just once in the 20-over format, losing the last four meetings. And Pakistan also lost their most recent T20 series against New Zealand, slipping to defeats in Auckland and Hamilton.

Top-ranked batter: Babar Azam (2nd): Both an accumulator and a dasher, Azam has looked a natural at T20I cricket ever since debuting in 2016. Only Kohli and Malan boast better T20I averages (minimum 20 innings) than his 47.32, and the Pakistani skipper boasts the record for the fewest innings (52) to the 2000-run mark in men’s T20Is.

Top-ranked bowler: Shaheen Afridi (17th): Tall, fast, and able to move the ball off the pitch and in the air, Afridi is a frightening proposition for any batter. If the 21-year-old finds his groove, Pakistan will prove to be the stiffest of oppositions.

Mohammad Rizwan (vice-captain): “We don’t have any issue in the top order. We’re all settled in our positions, and the only problems we had were in our middle order. When it comes to me or Babar changing our position for the sake of the team, we will of course be ready to sacrifice.” 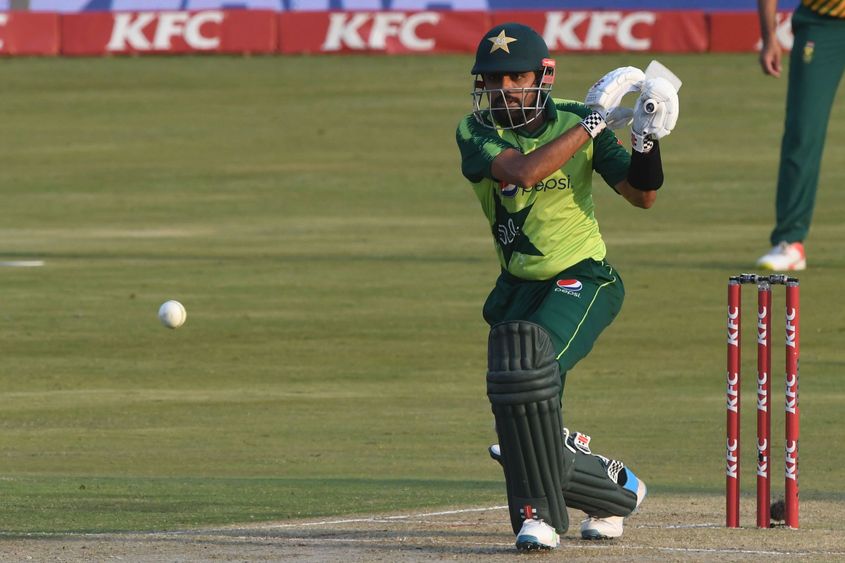 Babar Azam is at ease in the T20I arena.

Kane Williamson’s side is strong across all-formats and will be full of confidence after being crowned inaugural champions of the ICC World Test Championship. They reached the semi-finals in 2007 and 2016, which remain their best performances at a T20 World Cup.

New Zealand has never played Afghanistan in a T20I. The Kiwis won 2-1 in the most recent 20-over series against Pakistan but were smashed 5-0 in their 2020 series against India, with two of those losses coming in super-over eliminators.

Top-ranked batter: Devon Conway (4th) – Conway has been simply irresistible since making a late entry at the international stage and his numbers in T20I cricket are astronomical. Across 11 innings, he has made 473 runs at 59.12 with a strike rate of 151.11.

Top-ranked bowler: Tim Southee (7th) – Southee is enjoying a career-best year in T20I cricket, averaging 19.50 with the ball while leaking just 8.06 runs an over. Having finally won an ICC trophy in the World Test Championship, he’ll be keen to collect another winner’s medal at the T20 World Cup. With an arsenal of spinners and explosive hitters, Afghanistan go into the Super 12 stage with every reason to be confident. Especially after beating Zimbabwe 3-0 in a recent T20I series. Given their strengths with and against the turning ball, they will be hopeful conditions in the tournament are to their liking.

Afghanistan has yet to beat any of their Group 2 opponents, losing twice to India and once to Pakistan in their history. They are yet to face New Zealand in a T20 international.

Top-ranked batter: Hazratullah Zazai (12th) – The aggressive left-hander has excelled for Afghanistan since 2016, climbing as high as fifth on the batting rankings in 2019, and they will be hoping he finds his groove at the World Cup. An in-form Hazratullah makes Afghanistan a much more dangerous proposition.

Top-ranked bowler: Rashid Khan (2nd) – A constant near the top of the T20I bowling rankings, Rashid Khan is the fourth greatest wicket-taker in men’s T20I history and it would be a shock if he didn’t finish his career on top of the charts. Averaging a scarcely believable 12.63 with an economy of 6.21, he’ll be keeping plenty of batters up at night.

Rashid Khan (captain): “I’m a great believer that a captain is as good as his team. It is my duty now to serve my country & my team.”